Until 2003, just 3 bells hung in Fulbrook tower in a wooden frame and were rung from the ground-floor vestry. All these bells were cast locally, the treble and tenor in 1662 and the 2nd. in 1732. The Sanctus bell, from the same foundry, is dated 1649.

In 2002 the ringers (who were rather bored by the sound of “Three Blind Mice” and variations!) began fund-raising for a new bell-frame and a ring of six. Thanks to many generous donations from local people and grants from various charities, the new ring was installed and dedicated at a special service in November 2004. 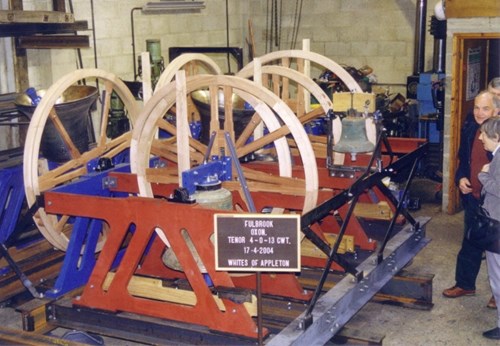 The ring now includes two of the original bells. Of the additional bells, one is a former Trinity House buoy bell given by Fulbrook Parish Council to commemorate the Golden Jubilee of H.M.Queen Elizabeth II in 2002. Three were newly-cast at Whitechapel in 2003 -- the treble given by a retired clergyman and ringer, to celebrate his 50-year membership of the Oxford Diocesan Guild of Church Bell Ringers, and the other two by local people in memory of recently deceased family members.

All the ringers are members of the Oxford Diocesan Guild of Church Bell Ringers. Six of us live in Fulbrook and we all ring for services at Burford, Taynton and Asthall, as well as Fulbrook.

Sunday service ringing is usual on all but the fifth Sunday of the month from 9 to 9-30 am.

Practices are usually held at Fulbrook on the first Friday of the month from 7-30 till 9pm. Practices are held at Burford on all other Fridays, also at 7-30pm.

If you would like to find out more about bells and bell-ringing have a look at the Diocesan Guild website www.odg.org.uk or telephone either of the above.

Perhaps you’d like to learn to ring? If so, get in touch with Nigel Harrison, who offers careful one-to-one instruction for all beginners. Why not help us to keep this ancient craft alive? Recruits of any age are most welcome!